Names of Balinese people, if you go to Bali, you will find that most Balinese names have frills, Wayan, Made, Nyoman, or Ketut. The use of the name is not limited to men, but also to women.

Regarding the use of names by residents of Bali, there are things that must be considered. The use of the name is not done carelessly. They have traditions for each child’s name. There are 3 factors that influence the name pinned on a child: caste, gender and birth order.

Order of the Balinese Caste

As with Hindus, Balinese people have a caste system. The caste system is a hereditary inheritance from ancestors. There are 4 caste divisions in the Balinese social system, namely:

Usually, religious leaders who are part of this highest caste live in a complex called griya. Next, they inherited griya to their descent.

However, that condition has changed. Not all members of the Brahmin caste have a profession as religious leaders. There are also those who work in other fields. Even so, they still have the privilege of staying in griya.

People who belong to this caste usually use the name Ida Bagus for men. Meanwhile, for women usually embed the name Ida Ayu or abbreviated as Dayu.

The knight caste is intended for royal members of the nobility. Like brahmins, they live in the area around the ancestral castle. However, now the conditions have changed. There are also members of the knight caste who live abroad and their profession is not only in the field of government.

The use of names in people who belong to this caste is also quite a lot. Anak Agung, abbreviated as Gung, Cokorda, abbreviated as Cok, Desak, and Gusti, is a type of name they often use. In addition, there are also emblems on the names of Dewa and Dewa Ayu.

The third caste, namely Vaishya are people who work as traders and industries. Generally, they use the names Ngakan, Si, Sang, and Kompyang. It’s just that, the name is now rarely used because of assimilation with the Sudra caste.

Sudra is the lowest caste in the system of the people of Bali. Unlike other castes, Shudras are castes that do not have titles. Instead, naming people in the Sudra caste refers more to the birth order. 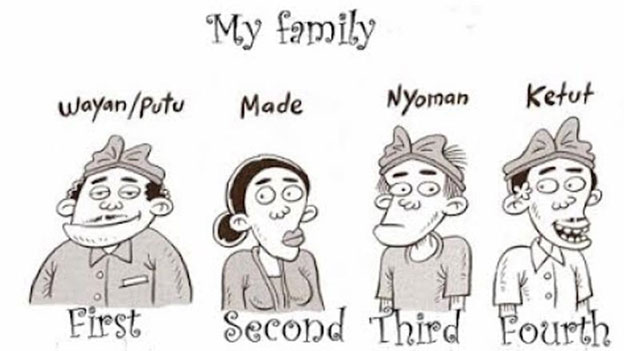 The second factor that affects the name is gender. Men have different types of names than women. I is the type of prefix used for baby boys, for example I Gede, I Dewa. Meanwhile, Ni is used for women.

In the Sudra caste, Luh is often used as a name indicating the sex of a girl. Ayu which has a beautiful meaning is also a name that is often used for the identity of girls. Meanwhile, castes besides Shudras also often use Istri which are the equivalent of Ayu‘s name to women.

Finally, the order of birth is also the way Balinese call their children. The first child used the name Wayan, Putu, or Gede. For the record, for nobility, usually prefer to use the name Putu rather than Gede or Wayan.

Meanwhile the second child is usually given the name Made which comes from the word “madya” which means middle. Alternatively, you can also use the name Kade, Kadek, and there are also some areas in Bali that use the name Nengah.

Furthermore, the third child tends to be named Nyoman or Komang. This name has a young meaning that comes from the word “anom”. Finally, the fourth child is generally named Ketut. Ketut has a word from “Ketuwut” which means to follow.

Then, what if there are more than 4 children in a family? Easy. The use of names according to the order of birth will repeat. Unique, right?

ปั้มไลค์
July 24, 2020
Like!! I blog quite often and I genuinely thank you for your information. The article has truly peaked my interest.
Back up
x
x
Chat On WhatsApp Now!!!